Bad science: why you should really put down the hopi ear candles (p.6) and homeopathy (p.28) and the fascinating world of the placebo effect (p.63).

‘The modern antiquarian’ Julian Cope’s guide to megalithic sites in Britain. Interesting essays in the first half and a colour coded guide in the second.

Read the excellent introduction to ‘revolution in the head’ for an understanding of why the sixties hippy dream crashed and burned (or did it?).

People’s eye witness accounts: Spanish civil war: ‘Blood of Spain’. Julius Caesar conquering Gaul and what he found. Camera in conflict: civil disturbance goes from the earliest photo of a protest (the Chartists in 1848) to the sixties bringing events vividly to life.

Ever wondered what it was like being a transvestite in Stuart England? Wonder no more with ‘travesties and transgressions in Tudor and Stuart England’ (p.92).

Rent: A graphic novel using author’s experience of being a prostitute.

Persepolis: a graphic novel around one person living in Tehran before, during and after the Iranian Revolution.

Brassai: photos from ‘the secret life of paris in the 30s’ feels like an insider glimpse into a vanished underground.

On Liberty J.S. Mill sums up the argument that if you are not hurting anyone else then your activities are your own business.

Come read the bits they didn’t seem to go into much at school:

12 Noah gets drunk and damns a son to perpetual slavery for having seen him naked.

21 Lot and his daughters and their re-population plans…

Understand how the bible uneasily comprises of different tribes creation myths in the history of ‘the bible’ by Karen Armstrong.

To re-inspire you around the wonders of existence and love read some Rumi.

Brush up your skills with the ‘SAS survival guide handbook’ on testing unknown plants (p.57), and building an igloo (p.123).

Finish that song or poem you’ve been struggling with using the ‘rhyming dictionary’.

Work out what’s going wrong with yours in: ‘backyard composting’.

The idiocy of using drinking water to flush away nutrients, learn about the broken nutrient cycle (p.42) and other uses for urine in ‘Liquid Gold’.

Humanure handbook: How to make compost toilets, arm yourself with the facts around how the composting process deals with all potential pathogens (p.127) rendering them completely harmless within two years and leaving enviable compost.

Learn a skill around going off grid seventies style with: ‘the mother earth news almanac’.

The world around you

See what is growing at this time of year in the ‘illustrated wild flower finder’s calendar’ and then learn more about it in the ‘the new herbal and encyclopaedia of medicinal plants’.

Look at the animal tracks and signs book to see what has been creeping round your yard.

Borrow the star finder and put in today’s date to see what will be up tonight.

Any part of Caitlin Moran’s ‘How to be a woman’ is funny. Just one example is what to call female genitalia (p.57).

Hitchhikers guide to the galaxy series will have you chuckling on most pages.

Pick any show out of Bill Hicks ‘Love all the people’ and re-remember how needed he still is.

A reprint of 1946 ‘guidance to US servicemen’ gives a short, wry look at US/UK differences (two nations divided by a common language indeed).

Trouble sleeping? A quick browse through ‘the observer guide to grasses, sedges and rushes’ should see you right!

MISC: Hunderwasser: the need for buildings to incorporate trees. As colourful in his architecture as his art. 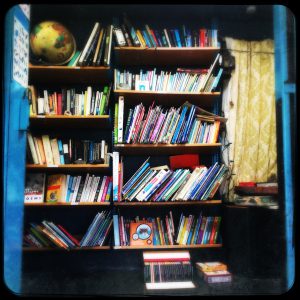